Mayor’s Office of New Urban Mechanics in Boston, the « match.com » for the government

In the context of constrained public finances and given the complexity of the urban issues that have to be addressed, many municipalities test and implement new methods and practices to innovate. Among these practices is the Mayor’s Office of New Urban Mechanics (MONUM), which I could not miss while in Boston.

Boston’s MONUM is the in-house research and civic innovation office that gives city staff the space to experiment. It was launched in 2010 by the former Boston Mayor Thomas Menino who was known as the city’s urban mechanic and is still strongly supported by the current Mayor, Marty Walsh. It is part of three offices of the New Urban Mechanics network – the City of Philadelphia and the Utah Valley University hosting the two others.

The city agency focuses on four major issue areas: Education, Engagement, the Streetscape, and Housing. The diversity of the projects conducted is illustrated here.

Boston’s MONUM defines itself as a department of YES and I experienced it myself by being warmly welcomed by Nigel Jacob, Kris Carter (both co-chairs for the MONUM), Susan Nguyen, Sabrina Dorsainvil and Max Stearns from the Boston’s Housing Innovation Lab, Stephen Walter (program director – with a focus on engagement) and Kimberly D. Lucas (research director). 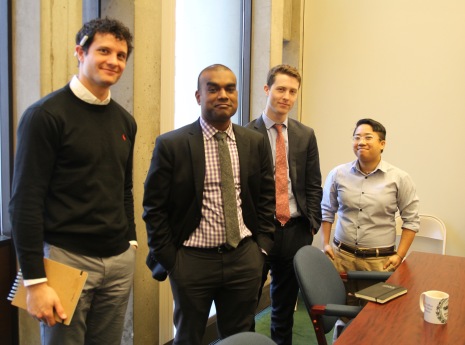 Our discussion first approached MONUM’s implementation within City Hall and its relation with other internal departments.
MONUM members’ position is kind of hybrid in the sense that they sit in the MONUM but are contracted out to the specific department with which they tryout new services.
This choice allows the team to be physically present and integrated in a specific City Hall department while having the space to step away and do the innovation work.

Kris Carter mentioned the importance of having a « champion » in the specific department that will conduct the project as well as benefit from the support of the MONUM team.

In addition to details about MONUM’s internal relations, I had the goal of learning more about its collaboration with the several universities present in the area, knowing that their work is mentioned as an example to follow in Montreal.

Local universities are the biggest external partner of MONUM, with which they interact in several ways:

BARI’s strategy is to bring researchers and public practitioners together to facilitate policy-relevant research that also addresses scholarly questions.

Those relationships are a mutually beneficial partnership, making scholars’ and students’ work real while getting the city’s work further.

Stephen Walter also mentioned the existence of the Boston Civic Media Consortium, a faculty-led trans-sector network housed at the Emerson Engagement Lab focusing on civic media research and pedagogy of which The Mayor’s Office is an active member.

Throughout the conversation, MONUM staff points out that their capacity to bring everyone into the frame is made possible by the Mayor’s willingness to do so.